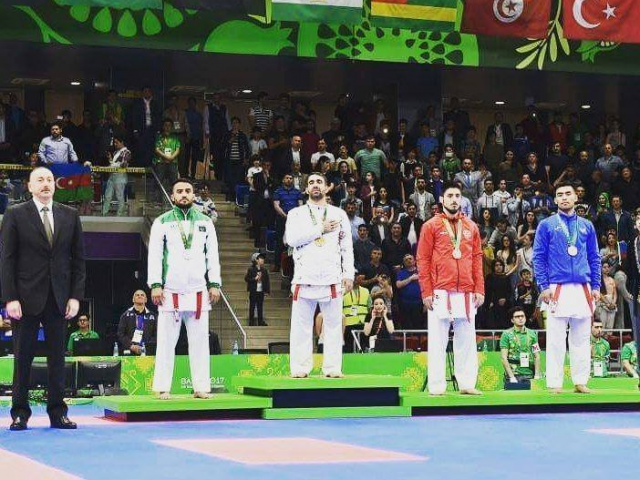 KARACHI: Pakistan finished their campaign at the 2017 Islamic Solidarity Games with three silver medals and nine bronze medals in Baku, Azerbaijan but karateka Saadi Abbas feels that the achievements were down to the athletes’ hard work rather than any special effort from the government.

The 2014 US Open winner won silver for Pakistan in Azerbaijan at the 75kg karate event and remained the only player in individual sports to reach the final, while the other two silver medals came in the tennis men’s team event and the 4x400m race in athletics.

Three bronze medals were added to the final count courtesy wushu players namely Obaidullah in 65kg, Maaz Khan in 75kg and Ahmed Zahoor in 52kg, but all three of them lost in the semi-finals.

In overall rankings, Pakistan finished on the 27th place without any gold medal, whereas Libya, Sudan and Kuwait had withdrawn from the games leaving 55 countries competing for the medals.

At the end of the 12-day event, Azerbaijan took first place with 75 gold medals and Turkey was the close second with 71 gold medals, while Iran wrapped up the games on the third place with 38 gold medals.

“It has been a tough competition for us in karate and then it is never easy for players to win in boxing, wrestling, weightlifting or even tennis,” the 75-kg silver-medalist, Abbas told The Express Tribune. “Pakistan is far behind on the medal tally because our government only takes sports as an extracurricular activity.”

Abbas also felt taken aback by the criticism he faced for not winning a gold medal. “I won a silver medal and now when I’m back in Pakistan I hear people say that it is bad that I didn’t win a gold medal. They criticize but they don’t realize that even at Islamic Games the competition is tough. I lost to Azerbaijan’s Rafael Aghayev who is one of the top players in the world. Of course he was better than me because there have been a lot of facilities available to him. Not just for me, but whatever medals we won, we won because of the hard work and talent of the players.”

Locusts Could Cause a Rs. 500 Billion Loss in Pakistan

Estimated COVID-19 Cases in Lahore Are Over 650,000, Govt Documents Reveal