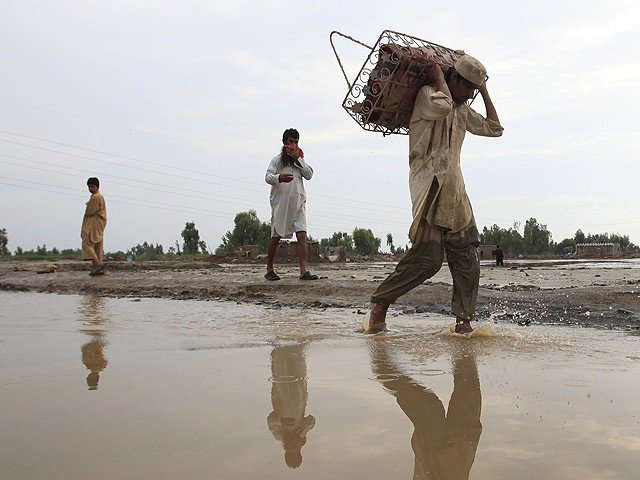 People walk through a flooded road in K-P. PHOTO: REUTERS

ISLAMABAD: With an eye on the high toll of natural calamities, the Council of Common Interests (CCI) has approved a Rs177.6 billion for the National Flood Protection Plan Phase-IV, of which 50 per cent will be provided by the federal government and the rest pooled from provincial governments.

Prime Minister Nawaz Sharif chaired the 31st meeting of CCI on Tuesday, while the chief ministers of all four provinces were in attendance.

According to a notification issued by the PM Office, the plan that spans 2015-16 through 2025-26 aims at developing an integrated flood management system by focusing on reservoir operations, flood forecasting and early warning, flood risk zoning, watershed management, flood proofing and insurance, disaster management, and other non-infrastructural measures.

Over the past few years, the Federal Flood Commission has been issuing warnings about the high magnitude of climate change impact including floods. According to the commission, the overall damages incurred in the last six years due to floods alone is almost equivalent to the total flood damages incurred in the previous 60 years.

Floods are among the most devastating natural disasters and are generally caused by heavy concentrated rainfall in catchments during the monsoon. According to official figures, flash flooding triggered by torrential rain led to 1,029 deaths in the monsoon season over the last three years. In the same period – 2014 to 2016 – another 1,297 people were injured and 4.5 million affected by flash floods.

The plan the CCI has approved has been dubbed the need of the hour and had been pending with the CCI since February 2016. In Tuesday’s meeting, all provinces agreed that the frequency and intensity of floods and corresponding damages have increased manifold, making it imperative to have an integrated and innovative approach to flood protection.

The 10-year plan has been formulated by the Ministry of Water and Power using World Bank funding.

Elsewhere on the agenda

According to sources familiar with the meeting, the CCI also gave the last opportunity to Minister for Planning and Development Ahsan Iqbal Chaudhry to discuss the devolution of Higher Education Commission (HEC) in light of the 18th Amendment.

The issue has been pending with CCI for the last three years. A CCI sub-committee headed by Iqbal is supposed to mull the role of the central HEC and provincial HECs in the post-18th Amendment scenario and make recommendations to the CCI for a final decision. However, insiders say the provinces, especially Sindh, have shown little interest in resolving the issue and keep sending lower-grade officers for the meetings.

The Tuesday meeting tasked Iqbal with ensuring that the crucial issue is resolved soon lest the provinces start discrediting degrees issued in other provinces after the formulation of their respective provincial HECs.

The council was briefed on the completion of consultations on National Forest Policy 2015 with all provinces and it also expressed satisfaction over the 6th population and housing census under way in the country.

The Ministry for Water and Power informed the CCI that issues regarding the settlement of net hydel profit between Wapda and Punjab have been settled wherein Wapda has issued a Rs38.12 billion promissory note in favour of Punjab.

Under the 18th Amendment, it is mandatory to hold a CCI session after every 90 days. The last meeting was held in December.

Cement Sales Down by 38% in May

Punjab’s Upcoming Budget To Be Presented on June 15

Federal Cabinet Meeting Is In Progress