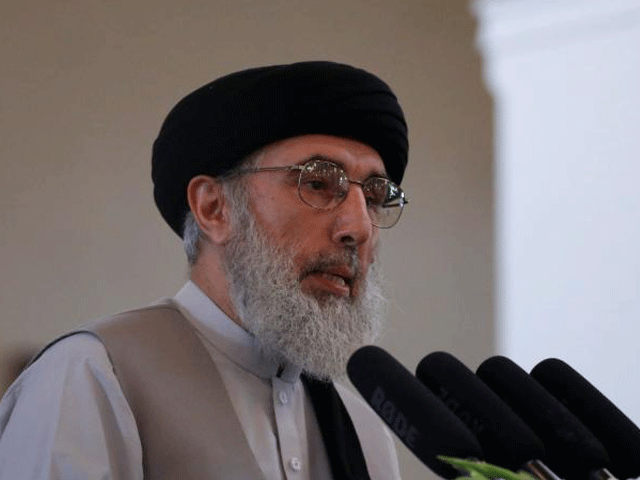 Afghan warlord Gulbuddin Hekmatyar speaks during a welcoming ceremony at the presidential palace in Kabul, Afghanistan May 4, 2017. PHOTO: REUTERS

KABUL: Former Afghan warlord Gulbuddin Hekmatyar returned to Kabul on Thursday after two decades in hiding, calling for peace with Taliban insurgents and criticising the Western-backed government, which he said was not working.

Hekmatyar’s comments in a ceremony at the presidential palace highlighted the complications likely to face President Ashraf Ghani, who signed a peace deal with Hekmatyar last year that brought his Hizb-i-Islami party into the government fold.

Even before the ceremony, Hekmatyar’s arrival in Kabul, the city his forces bombarded ruthlessly during the 1990s civil war, appeared aimed at reinforcing his status as a major new force on the political scene.

A convoy of dozens of white pickup trucks carrying armed men and draped in Afghan flags and green banners made its way through the capital as it brought Hekmatyar from Jalalabad, the eastern city where he has been based for the past few days.

Calling his former allies in the Afghan Taliban “brothers”, Hekmatyar, a charismatic speaker whose address was frequently interrupted by shouts of acclamation, portrayed himself as a mediator able to bring peace.

That, he said, would remove the justification for the presence of foreign troops in Afghanistan.

Ghani and the Americans have long pursued a negotiated peace with Taliban militants, but their efforts have come to little and the insurgency has gained ground in recent years, claiming thousands of lives each year.

“The most important issue for me is to end this war and rescue the country from crisis,” said Hekmatyar, calling on neighbouring countries like Pakistan and Iran not to interfere.

The Hizb-i-Islami leader said he had accepted the constitution drawn up following the US-led campaign that ousted the Taliban in 2001, but wanted it amended and said a parliamentary system was not appropriate for Afghanistan.

The national unity government led by Ghani and Chief Executive Abdullah Abdullah, painstakingly brokered by Washington after the disputed election of 2014, was “not working”, he said, and either Ghani or Abdullah should resign.

“It is not suitable for the current condition of the country,” he said, but added that he was not seeking any formal position for himself. “I am not here for partnership. I have no conditions, I don’t want ministries.”

Hekmatyar also made a pointed call to politicians, many of whom keep their families abroad: “Bring your families back to Afghanistan. I have returned with my family.”

International partners including the United States have welcomed the agreement with Hekmatyar, seeing it was a possible precursor to a deal with the Taliban, the country’s dominant militant group.

The Taliban has shown no sign of accepting any arrangement with Hekmatyar, but Ghani thanked him for accepting the deal and said the Afghan people wanted peace and prosperity.

“We have promised the nation that we will pave the way for the peace and today an important step has been taken,” he said.

But in Kabul, where he is widely known as “Rocketyar” after the thousands of bombs his forces fired into the city, Hekmatyar has been awaited with a mixture of anticipation and mistrust.

Over recent days, posters of his face had been plastered all over the city, many immediately defaced by opponents.

Abdullah’s mainly Tajik Jamiat-i-Islami party has been particularly suspicious of Hekmatyar, who draws most of his support from the Pashtuns, traditionally Afghanistan’s strongest ethnic group.

Human rights groups have also been strongly critical of the agreement, saying it reinforces a culture of impunity that allows political strongmen to get away with gross abuses.

First US air strikes on Taliban since ceasefire

This Beautiful Wallpaper Can Brick Your Android Phone

Google Faces $5 Billion Fine for Snooping On Your Incognito Tabs

'Mixed messages', not public, to blame for violation of COVID-19 SOPs: CM Sindh

Areas Where COVID-19 Cases Reported Are Under Lockdown: Zafar Mirza

Huawei Nova 7i – The Hottest Selling Secret Weapon of Mobile...