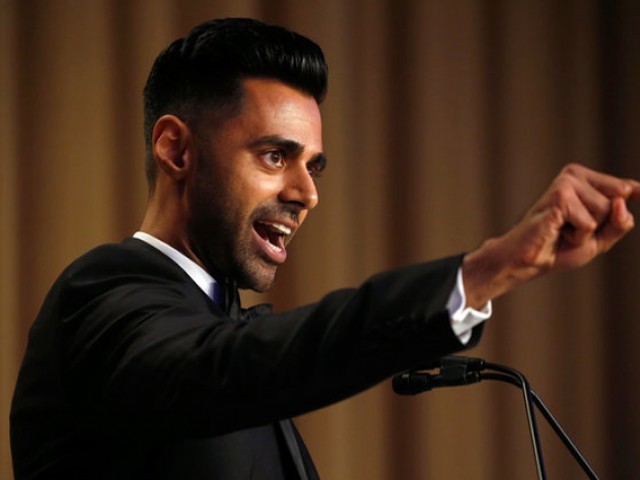 US President Donald Trump missed the first White House Correspondents’ Association dinner of his presidency but that didn’t keep the night’s entertainer, comedian Hasan Minhaj, from targeting him.

The Indian-Muslim who is a comedian on the ‘Daily Show’ used his 25 minute long monologue to address “the elephant not in the room”.

Here is a list of Minhaj’s funniest jokes of the night.

1) On immigrants in America being left to do the dirty work:

“I would say it is an honour to be here, but that would be an alternative fact. It is not. No one wanted to do this. So, of course, it lands in the hand of an immigrant. That’s how it always goes down.”

“King Joffrey is president, it feels like the Red Wedding in here.”

3) Addressing the elephant NOT in the room:

“We’ve got to address the elephant that’s not in the room: the leader of our country is not here…. And that’s because he lives in Moscow. It’s a very long flight. As for the other guy, I think he’s in Pennsylvania because he can’t take a joke.”

4) On the stress that the Trump administration is invoking:

“The news coming out of the White House is so stressful, I’ve been watching ‘House of Cards’ just to relax.”

“A lot of people in the media say that Donald Trump goes golfing too much. . . which raises a very important question: Why do you care? Do you want to know what he’s not doing when he’s golfing? Being president. Let the man putt-putt! . . . The longer you keep him distracted, the longer we’re not at war with North Korea.”

6) On Trump and his infamous tweeting habits:

“You know that Donald Trump doesn’t drink – does not touch alcohol … But think about that. That means every statement, every interview, every tweet – completely sober … He tweets at 3 am sober. Who is tweeting at 3 am sober? Donald Trump. Because it’s 10 am in Russia: those are business hours.”

7) On the overwhelming experience:

“I feel like I am a tribute in the Hunger Games. Like, if this goes poorly, Steve Bannon gets to eat me.”

8) On Fox News’ bias against Muslims:

“As a Muslim, I like to watch Fox News for the same reason I like to play ‘Call of Duty.’ Sometimes, I like to turn my brain off and watch strangers insult my family and heritage.”

9) On the fact that an entire group of people get blamed if one messes up:

Addressing the journalists, “You gotta be on your A game. You gotta be twice as good. You can’t make any mistakes. Because when one of you messes up, he blames your entire group. And now you know what it feels like to be a minority.”

10) On Trump’s military decisions since he took office:

“Historically, the president usually performs at the correspondents’ dinner, but I think I speak for all of us when I say he’s done far too much bombing this month.”

11) On the things Trump considers a threat:

“Donald Trump is liar-in-chief. Remember, you guys are public enemy number one. You are his biggest enemy. Journalists, ISIS, normal-length ties.”

You can view the entire performance here:

Govt. Promotes 10 Officers to the Rank of Air Vice-Marshal

Xiaomi Patents Another All-Screen Phone with a Humongous Camera