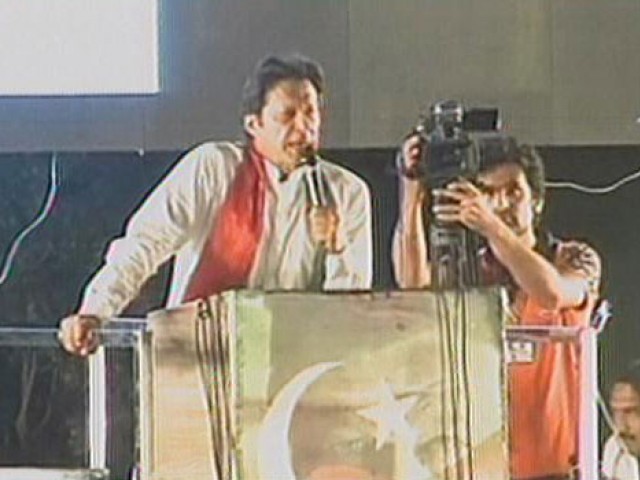 Criticising the government for its reluctance against probing corruption in national institutions, Pakistan Tehreek-e-Insaf (PTI) chairman Imran Khan said the premier himself will be caught for corruption if he decides to act against it.

On Saturday, Prime Minister Nawaz Sharif said investigating the myriad corruption cases of the past would divert the government’s focus from development.

“Only a country that ceases and shuns corruption is able to witness development,” Imran said while addressing a public gathering at Sialkot’s Jinnah Stadium on Sunday evening.

“I can tell  you how this country can prosper again, and that is through strengthening the institutions.”

“But how can you strengthen the institutions such as National Accountability Bureau (NAB) as you will be caught for corruption as soon as you do so,” Imran said.

The Pakistani nation, Imran reiterated, is becoming poorer as the rulers become richer. “Change does not come only by cutting ribbons,” Imran said while referring to the premier’s statement that his rivals may indulge in political point-scoring while he continues to inaugurate uplift projects.

“A small segment of the society is laundering the hard-earned money of the masses abroad,” he added.

In his statement on May 6, the premier said, “There are so many corruption cases that the more you try to count them, the harder it seems.” He added, “But one day, those behind these cases will meet their fate,” and asked “In this country, so many cases of corruption and embezzlement need investigation – which one should be probed first?”

Political parties have escalated their campaign against the ruling PML-N following the Panamagate verdict on April 20 which ruled that the PM and his sons, Hasan and Hussain will have to appear before a Joint Investigation Team (JIT) to record their statements.

Only 15% of Pakistanis Have Moved to Digital Payments: Survey

Entrance of Outside Vehicles In Sindh Secretariat Banned

Multan will not be ignored in administrative arrangement of South Punjab: FM Qureshi

Ministry of Commerce Clarifies Position on Export of PPE

Schools Will be Reopened from August 15 if Situation Improves: Murad Raas