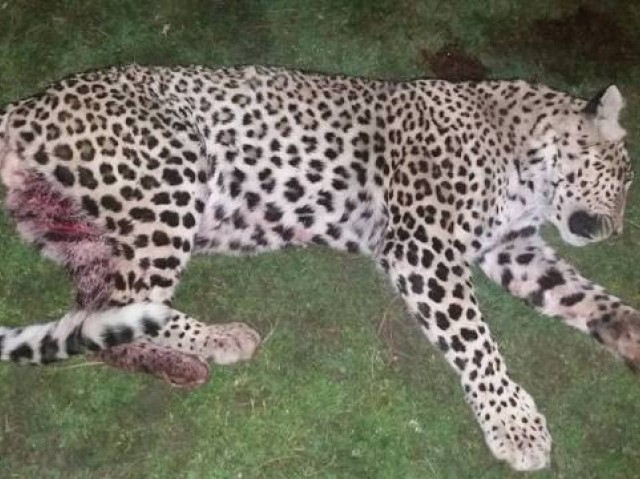 The villagers said they killed the big cat with the help of police in self-defence. PHOTO: EXPRESS

MUZAFFARABAD: Villagers on Tuesday killed a leopard in the Mandal area of Leepa Valley in Hattian Bala district, some 100 kilometres away from the capital city of Azad Jammu and Kashmir (AJK).

The villagers said they killed the big cat with the help of police in self-defence.

Deputy Commissioner Hattian Bala Hamid Kayani told The Express Tribune that the leopard had killed five cattle heads in different villages of Leepa in half an hour before straying into the residential areas.

“The villagers tried their best to scare the big cat away but it became more violent and started charging at them,” he added. “In the end, the villagers sought help from the local police who then killed the leopard to save human lives.”

The director of AJK’s Wildlife and Fisheries Department, Nayeem Iftikhar Dar, said he has ordered an inter-departmental inquiry into the killing of the big cat.

“We have eight watchers in Leepa Valley and if they could not save the endangered leopard then they will have to face the music,” he added. “Leopard is one of the big cats found in the Himalayas region and is living in the upper reaches of Neelum and Leepa valleys.”

Coronavirus Cases in Pakistan Jump to 66,457

Searle to Start Selling Remdesivir in Pakistan for COVID-19 Treatment

Unemployment Rate Could Reach 28% in Pakistan Due to COVID-19